Really hope we can hold on to all these guys. The skill players in this class are absurdly talented.
Click to expand...

Name alone should have gotten him the offer

Seems to hit harder this year....

seth martion (ol) and everman 3-3 (2-1) travel to cleburne 3-3 (1-2). everman looks to be in good position to make the playoffs as they have already played aledo, are in a 3-way tie for second with mansfield timberview and burleson, and have a favorable closing schedule.

dj allen (ath) and gladewater 4-2 (3-0) have won 3 straight after a rough start of the season with big losses to gilmer and kilgore. they face jefferson 4-2 (1-1) . if gladewater can get through the next two weeks against jefferson and white oak it sets up a big district showdown with sabine in the final regular season game.

matthew golden (wr) and klein cain have recovered nicely since a brutal opening loss on nationally television to bridgeland. since that game cain has outscored opponents 3 to 1 and golden is the top receiver in the state. this week cain 5-1 (3-0) plays klein collins 2-4 (2-0) who struggled early, but is the only other undefeated team in the district. cain should win and put themselves in a position to win the district going away.

major everhart (rb/ath) and amarillo tascossa 5-1 (2-0) play caprock 2-4 (1-1) and caprock's struggles to score this year shouldn't bode well with the explosive tascossa team. with the other undefeated team in the district (coronado) playing amarillo tomorrow a win could put tascasso in the driver's seat for the district title.

treven macalpine (dt) and saraland 6-2 (5-0) are at robertsdale 3-5 (1-4) . win this game and saraland gets to try to win the regular season title at home next week and based upon the way their defense has played this year there is a good chance that happens.

jaylon guilbeau (cb) and port arthur memorial 5-1 (3-0) play beaumont united 1-5 (1-2) . pa memorial has only given up 7 points in district play so far and when you consider that united's biggest point total this year is 19 in a loss to montgomery things look good for pa. they just don't want to get caught looking ahead to next week's match up with district co-leader baytown lee.

finally, joseph adedire (de) and mansfield summit 4-2 (3-0) play in the big game of the week for frog commits as they travel to colleyville heritage 5-1 (3-0) who is the district co-leader. summit traveled earlier in the year to austin to face westlake and one reason you play those types of games before district play is to prepare for this game tomorrow. defense has lead the way for summit so far this year.

one future frog and his teammates were upset, another lost a heart breaker, and others rolled this past weekend.

ajay allen (rb/ath) and neville 6-1 (2-0) continued their winning ways as they beat minden 30-0. allen had a light workload for the night with only 10 carries, but gained 128 yards and scored his only td of the night on his 1st carry (51 yards) 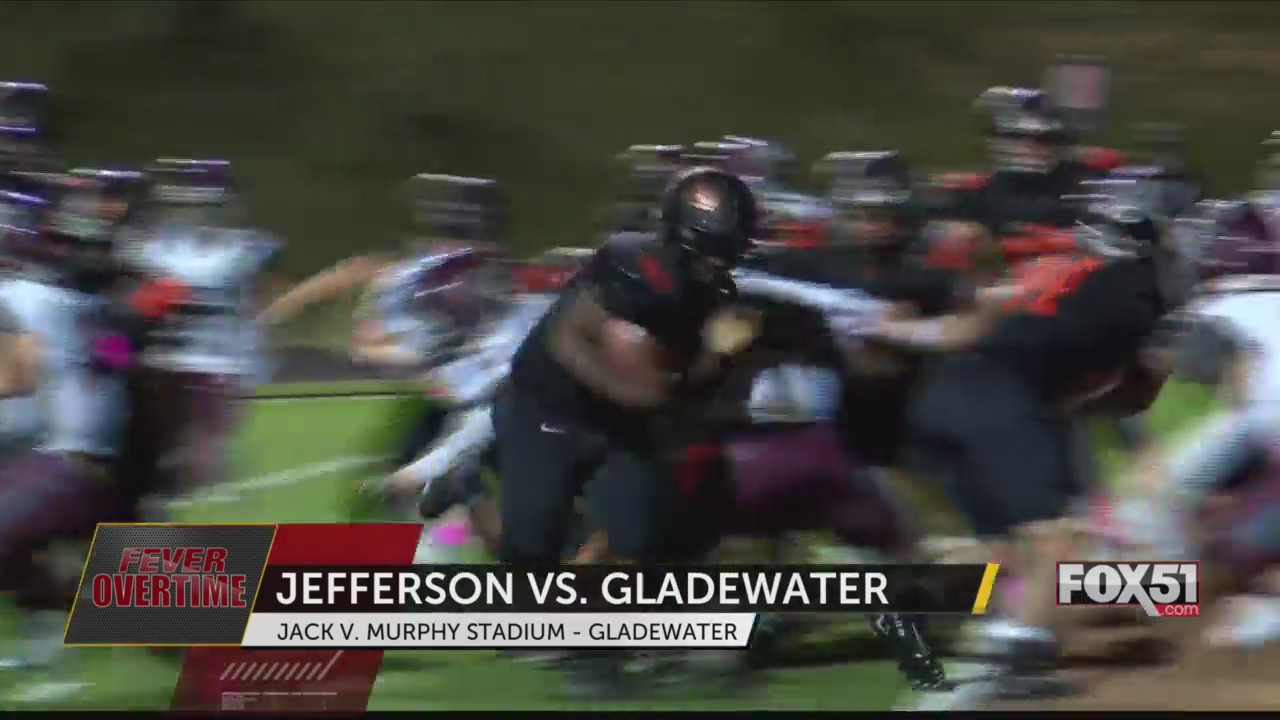 Gladewater stays undefeated in district with win over Jefferson

GLADEWATER, Texas (KETK) The Gladewater Bears are undefeated in district play after a win over the Jefferson Bulldogs Friday night. The final score was: 44-12. Gladewater will be on the road next w…

matthew golden (wr) and klein cain 5-2 (3-1) were upset by klein collins 21-36. cain struggled going 0 for 8 on 3rd downs, couldn't protect their quarterback, and collins rolled coverage over the top of golden limiting him to 7 catches for 83 yards 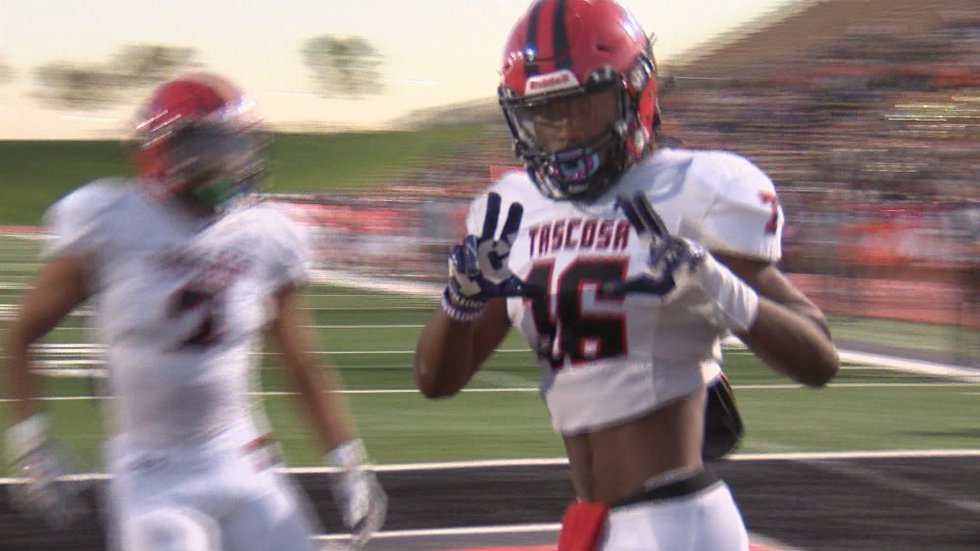 Tascosa improves to (3-0) in District 2-5A, Palo Duro shuts out Lubbock High

Week eight of Thursday night high school football did not disappoint. After a slow start on offense, Tascosa rumbled past Caprock 46-14 and Palo Duro earned their fifth win of the season after shutting out Lubbock High 24-0.

www.newschannel10.com
everhart for the season has carried 38 times for 675 yards and 9 td's and caught 9 passes for 248 yards and another 2 scores. he is average over 13 yards each time he touches the ball and a score for just over every 4 touches

jaylon guilbeau (cb) and port arthur memorial 6-1 (4-0) continued their dominance in district play beating beaumont united 34-9. memorial dominated the beaumont team and didn't give up a td until just over 3 minutes to go in the game 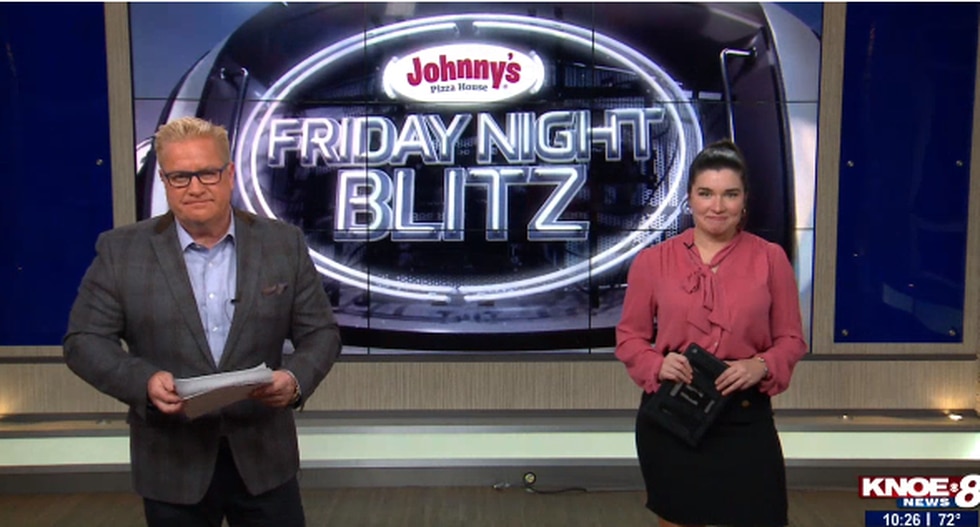 Games have finally wrapped up after contending with weather-induced delays.

finally, joseph adedire (de) and mansfield summit 4-3 (3-1) lost a heartbreaker at colleyville heritage 34-35. heritage avenged last year's playoff loss to summit in what has to be a disappointing loss for summit. 3 summit turnovers and a heritage punt return for a td put them behind but they rallied from 14 down only to get stopped on a 2-pt conversion attempt with less than 2 minutes to go in the game
K

Might be the funniest clip I’ve seen in a long time.

the human highlight film who doubles as a frog recruit, aj allen, is missing this week as neville had a bye, one recruit's team finished their regular season with a championship win, a few others set themselves up for big district games, and unfortunately a couple of strings got broken

dj allen (ath) was productive running and throwing the football for gladewater 6-2 (5-0) as they rolled white oak 48-14. the win sets up a big regular season final for the bears as they host district co-leader sabine 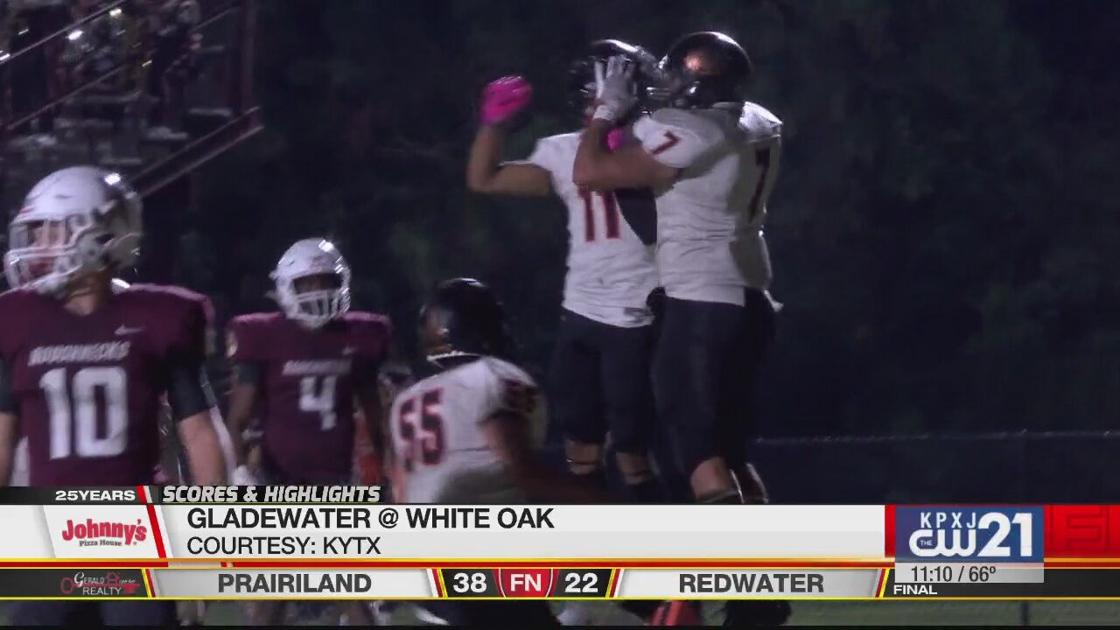 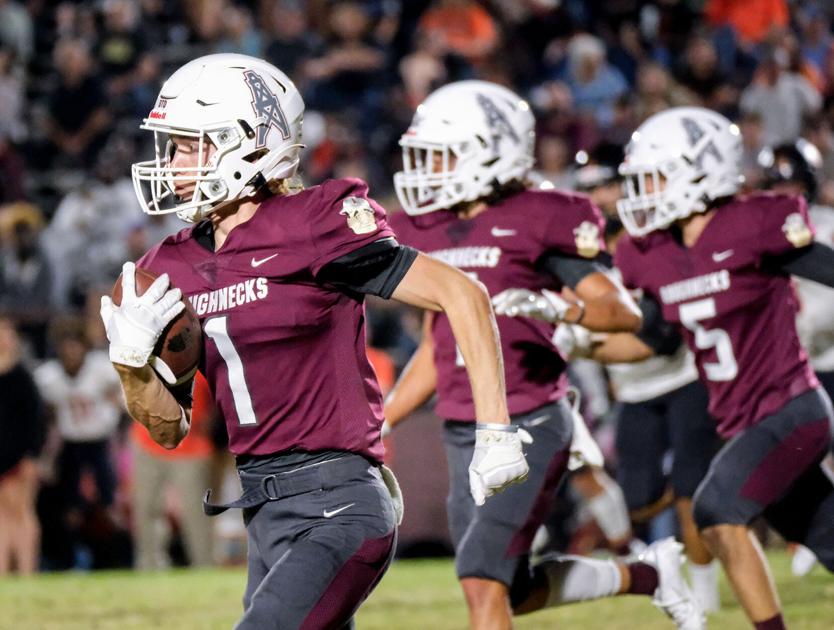 WHITE OAK – The homestanding White Oak Roughnecks got on the board first, but the Gladewater Bears answered with four straight touchdowns and cruised to a 48-14 win in district

www.news-journal.com
major everhart (rb/ath) and amarillo tascosa made history with their big win over lubbock monterey 60-18. the win locked a play off spot for tascaso for the fourth year in a row which is the longest such string in school history. 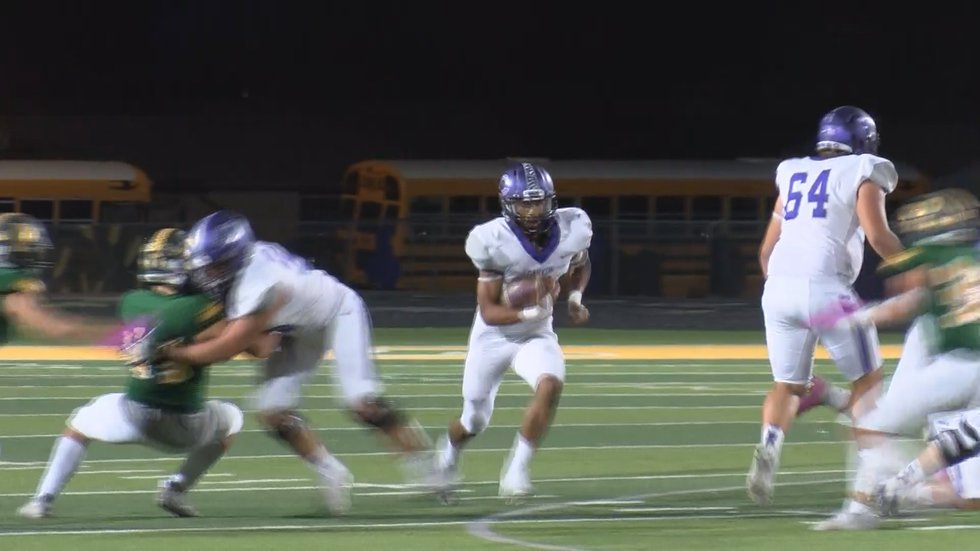 THE WRAP UP WEEK 9: Canyon wins Game of the Week, Clarendon tops Wellington by one point

Week nine of The Wrap UP featured some very good matchups. Canyon defeating Pampa in our Game of the Week 75-60, Clarendon hanging on to a 21-20 victory over Wellington and Wildorado winning an overtime 59-58 thriller over Silverton.

www.newschannel10.com
tascosa finishes their regular season next week at lubbock coronado and a win gives them the district title.

matthew golden(wr) was kept out of the end zone for a second week (6 catches for 75 yards) but klein cain 7-2 (4-1) rebounded from their loss last week by beating klein oak 31-3. cain will finish their regular season next week with a game against tomball

cade mcconnell (ot) and choctaw 6-2 (4-1) won a hard fought game on the road beating sand springs page 41-28.. choctaw is currently tied with tulsa booker t for second behind nationally ranked bixby and finishes the season with games against putnam city and at bartlesville 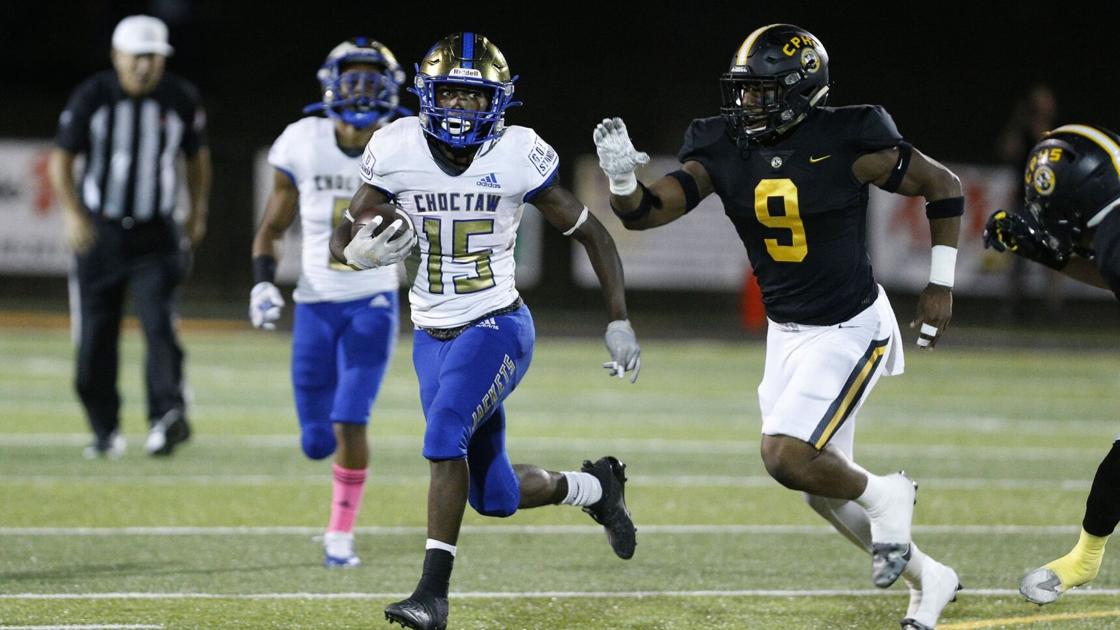 tulsaworld.com
seth martin (ol) and everman 4-4 (3-2) had a really rough night getting beat by burleson 64-28. everman still is in position to make the playoffs as they finish the season hosting waco university and at joshua

jaylon guilbeau (cb) and port arthur memorial 7-1 (5-0) kept up their winning ways beating baytown robert e. lee (interesting they haven't changed the name) 51-20. memorial has locked up the playoffs and is in position to win the district with a victory next week over baytown sterling. they finish the regular season at friendswood. 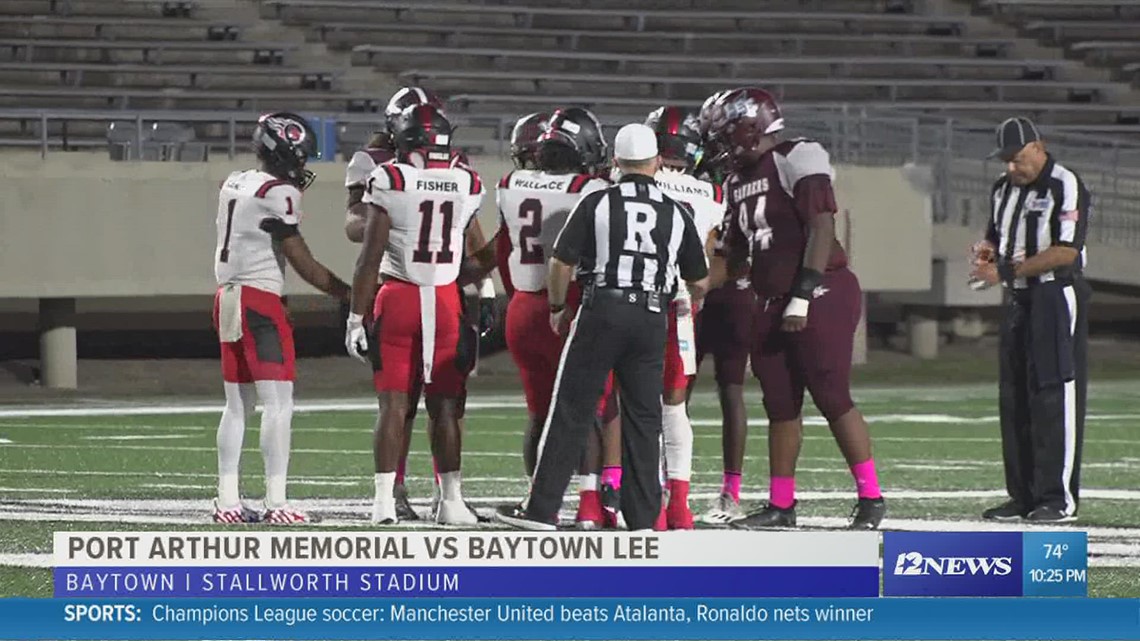 The Night of Upsets

www.knoe.com
west monroe hosts pineville next week before finishing with a big game on the road at ruston

this sets up a big game next week against midlothian for second place in the district.

finally and far, far from the least trevon mcalpine (dt) and saraland 8-2 (7-0) finished their regular season and won their conference with a 49-0 domination of citronelle. saraland begins post-season play next week hosting metumpka.

Froggish said:
Looks like Seth Martin went down with a lower leg injury last nigh
Click to expand...

sorry to hear that, hope nothing serious