We said goodbye to 3 guys to the 2006 NFL draft. 4th round - Cory Rodgers to GB, 5th round - Michael Toudouze to Indy, 6th round Drew Coleman to NYJ.

2006 overview. Florida wins the BCS over Ohio State easily (featuring 2 of the best college QBs who never caught a whiff of action in the NFL). Boise is the only undefeated team of the year. The regular season goes to 12 games. Instant replay shows up regularly. Troy Smith wins the Heisman in a landslide.

This would be another solid season and its time to acknowledge this man. He would be entering his 3rd season as the DC with Patterson. Dick Bumpas. 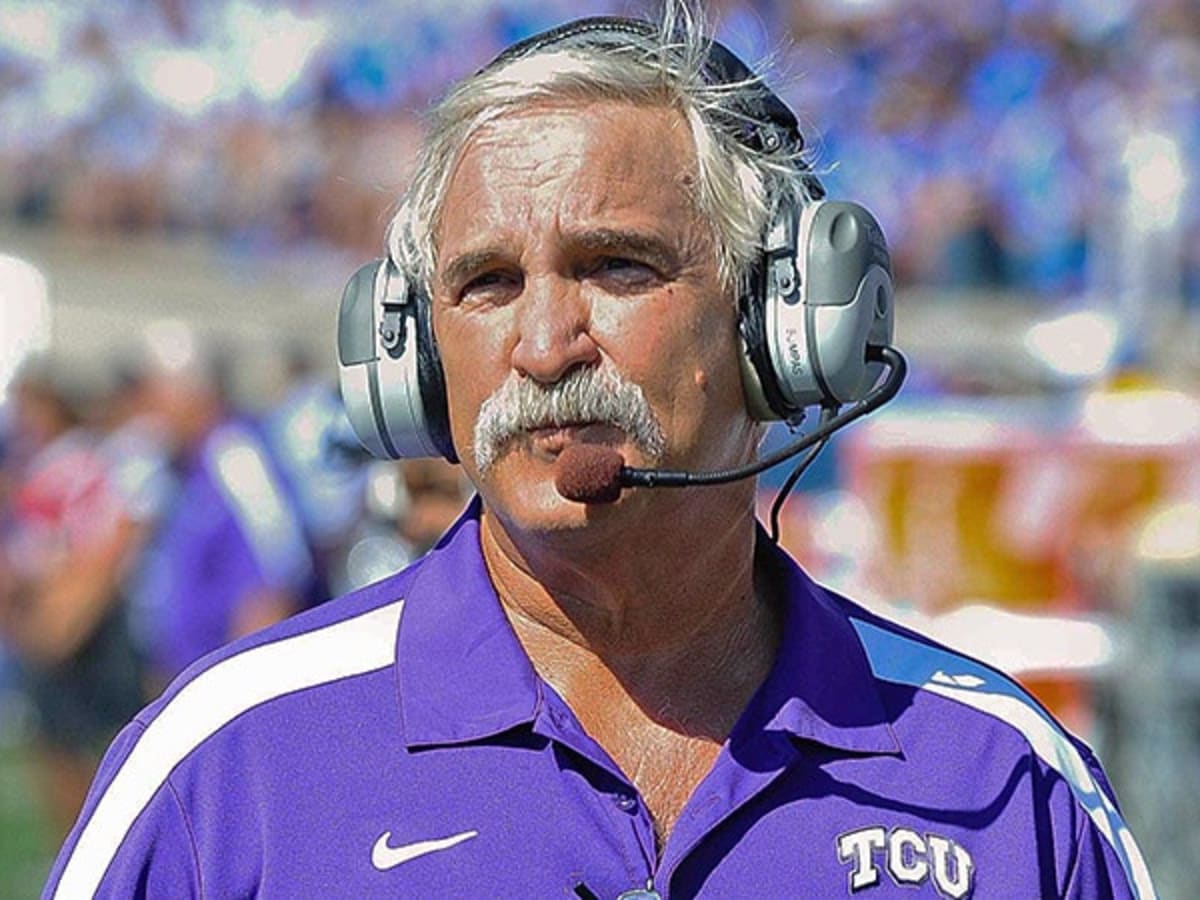 The ultimate coordinator. His whole coaching career and never to the head job. Needless to say, 2006 Frogs were part of his wheelhouse when discussing great TCU defenses. 2004-2014 TCU had some stout teams and Dick was a big part of that. I also appreciate Bonners chin strap look. If this were modern times, he could get some NIL money for that sweat band company.

The season started on a Sunday in Waco! I remember this road trip well and im sure MANY posters here made that trip.

The game was dicey mostly due to Jeff Ballard being knocked out of the game and the LEGEND of FRESHMAN Marcus Jackson coming in and leading the 2nd half charge including a long catch and run from speedster Aaron Brown. That was a fun revenge game when Baylor thought they could AT LEAST handle TCU in the MWC. They did not.

The Texas Tech game was one of the most exciting atmospheres I remember at the Carter. Tech brought their fans and we ALLLLLL remembered the 70-35 beatdown from the Air Raid offense. This game REALLY put a stamp on Patterson and Bumpas defensive scheming. Graham Harrell was a rag doll all game long. Our offense was stifled, (did I mention we lost Cory Rodgers) but man, we were in the backfield all day and it FELT SOOOOOOOOO GOOD to see Tech and Mike Leach walk out with 3 POINTS?!??!?!!

We've all watched it many times now, but here is another legend Marvin White.


It was only a 12-3 game, but, after that hit...you knew TCU wasnt having any of Mike Leach that day. What a moment for the program.

We would be ranked #17 after that win.

Unfortunately, the Frogs got exposed the following week on a Thursday night home game.


(LOL the soundtrack to this game highlight)

Unfortunately, we got to experience the wrath of a strong Utah defense and Ballard was knocked out early in this one. Marcus Jackson couldnt perform miracles again like he did Baylor. Ballard is no doubt a TCU legend but he did get a hurt a few times his senior year that affected the season. But still a legend.


Some more grainy highlights with a hilarious soundtrack.

We did get to make another fun trip to West Point and get back on the winning streak.

We were now 0-2 in MWC play. A big humbling experience for the team. Luckily, the schedule settled down and we would win out the rest of the way.

Not really convincing wins at all though. And there were a few whispers about the OC.

Coach Schultz and Gary went WAAAAAY back to their New Mexico days. Im not gonna take a crap on anyone here, but Coach Schultz was starting to get outclassed and 2009 would be his last season at Fort Worth. 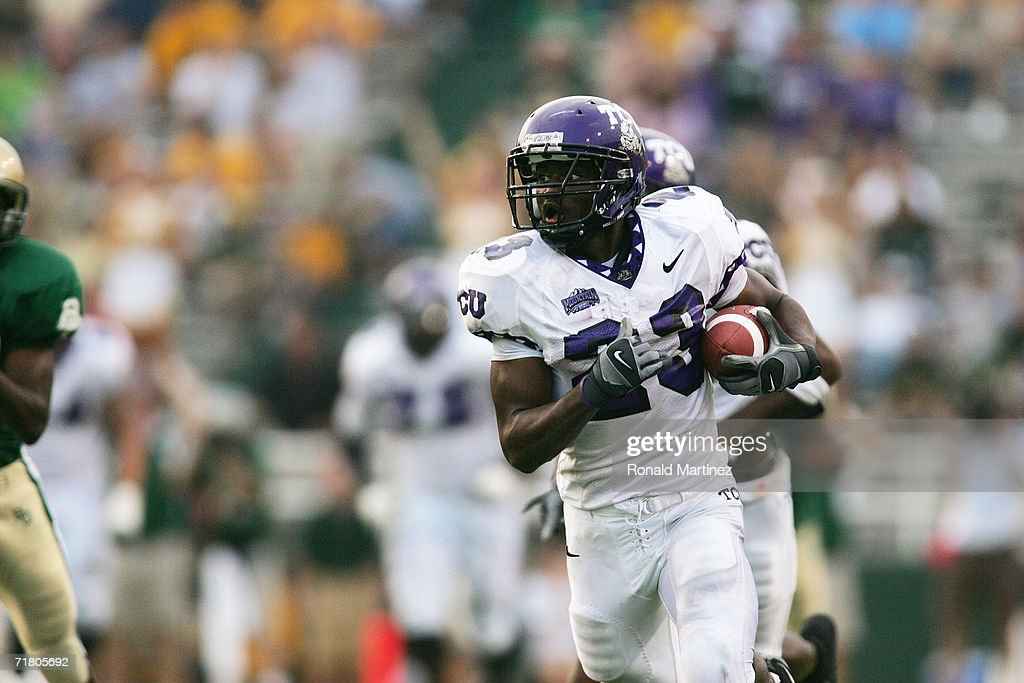 Aaron Brown was an unexpected surprise his SO. season. Nobody really saw this coming. We were just getting over Bob Merrill and Lonta was on his last run and then Brown came up. His SPEED was something we hadnt had at the running back position at TCU in a long time. He even had a few games as our leading receiver.

The final leg of the regular season allowed the defense to really show off what they've done all year.

Listen, these opponents werent great. But what do great teams do against lesser opponents? They dominate them. Which TCU did to end the season on a high note. Playing across from Tommy Blake had its benefits. The OL shifted his way. But Chase Ortiz took advantage of that and held his own as well. He didnt rack up the sacks but had ALOT of TFL and pressures that pushed the QB back towards Tommy. They really were the prototypical "speed ends" that Gary and Dick would lean on to make that defense so stout for so long. Shout out to Chase.

Also, SHOUT OUT to VERSUS!

Sometimes it was difficult to get, I think you had to have cable to get Versus, maybe it wasnt on DTV or Dish? Cant remember. But, I always enjoyed our games on their. A fond memory of a channel no longer around.

Because of our 2nd place finish in our conference. The bowl tie-ins really did us in. We were paired with a MAC school which, had some good teams in the past but this years Northern Illinois wasnt too great and well, we exposed them.


Here is the full telecast of the game. I remember how the media tried to put Northern Illinois in the same breath as TCU with "mid-majors" but after this season, people realized the best "non-power 5" were TCU, Utah, BYU, and Boise. (OHHHH WHAT MIGHT HAVE BEEN MOUNTAIN WEST!!) We will address that later.

Northern Illinois was SUPPOSED to have some dynamic running game that would test TCU. They hadn't met Jason Phillips before. The sophomore ABSOLULTEY trucked the whole 2006 season. Alot of kf.c posters still argue he was THE BEST linebacker at TCU. Hard to argue.

Ballard actually RAN all over the Huskies (underrated part of his game). Northern Illinois had 5 first downs (3 by penalty)

2006 season was a monster one. Credit to BYU that year and we would learn winning in Salt Lake City will be difficult.

But another strong season for TCU and the Gary Patterson era was humming along.

We were in Austin for the big music fest the weekend of the Tech game. Mrs. Brewingfrog and I skipped the music for the game telecast, which we took in at Scholtz Beer Garden. There were more than a few UT folk watching with us, and the Great White Hit was met with the same "Oooooh!" there. It was fun when they asked what we thought of the season and the future: "Well, we open with you guys next year."

BrewingFrog said:
We were in Austin for the big music fest the weekend of the Tech game. Mrs. Brewingfrog and I skipped the music for the game telecast, which we took in at Scholtz Beer Garden. There were more than a few UT folk watching with us, and the Great White Hit was met with the same "Oooooh!" there. It was fun when they asked what we thought of the season and the future: "Well, we open with you guys next year."

It was a moment in the program for sure. Marvin White and Tyler Luttrell hits are my 2 favs.
F

Wasn't that 12-3 game the one where Leach criticized his players for worrying more about their "fat girl friends" in the stands than worrying about the game? I was on the road home from a meeting in Memphis and listened to as much of the game as I could pick up on the car radio...about Texarkana, I think, when I could hear ESPN (?) radio broadcast....Turned on TV once I was home just in time to see The Hit.....Good times, good times....
Share:
Facebook Twitter Reddit Pinterest WhatsApp Email Share Link