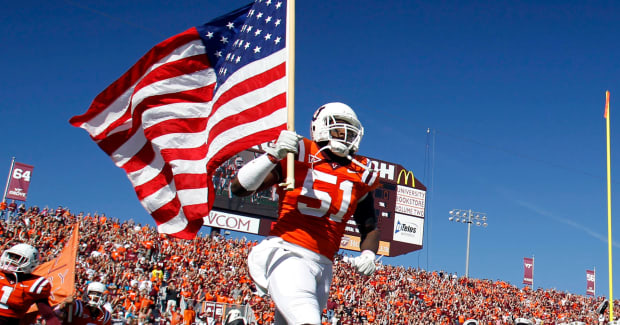 www.si.com
The board will vote on the new policy in August.

Analysts predict this change would only further increase the amount of players who enter the transfer portal and further entrench the idea of free agency in college football.

News of this proposed rule change followed another NCAA recommendation to introduce two "entry windows" for transfers, or periods of time when players must provide written notification of transfer.

If passed, that rule would create two transfer portal windows in college football: 45 days "beginning the day following the championship selection," and a 15 day period in the first two weeks of May at the end of spring practice, a total of 60 days.
Last edited: Jul 21, 2022
W

They seem hell bent on ruining the sport.

Max Olson @max_olson
Just to be clear: transfer windows means enter the portal during this period to be eligible next season. They don't need to make commitments within those windows.
Last edited: Jul 21, 2022
A

Ok with multiple transfering ... as long as they have to sit out a year on the 2nd move, which would be their
3rd school. They get to select their school, they can transfer with eligibility from there, but 2nd transfer, sit
out 1 year, with no loss of eligibility. Hopefully this reduces some of the money Piggery on both sides.
Last edited: Jul 21, 2022

I hope it passes. Total chaos will ensue and it will be easier than ever for mid-tier schools to get top flight talent that would have otherwise been pigeonholed on stacked rosters of the few mega-schools. They should also then ease the perception schools face when pulling a scholarship as well. And they should do away rule about the number of players that a school can sign in one year.

Some of these changes seem on the surface to play in favor of the mega-schools, but I think there are unintended consequences to those schools that have not been thought through.

Sangria Wine said:
I hope it passes. Total chaos will ensue and it will be easier than ever for mid-tier schools to get top flight talent that would have otherwise been pigeonholed on stacked rosters of the few mega-schools. They should also then ease the perception schools face when pulling a scholarship as well. And they should do away rule about the number of players that a school can sign in one year.

Some of these changes seem on the surface to play in favor of the mega-schools, but I think there are unintended consequences to those schools that have not been thought through.
Click to expand...

The Division I Council on Wednesday endorsed several recommendations intended to better support student-athletes, improve efficiency and timeliness in the infractions

And check this out, as it would seem to favor the more committed blue blood schools with bigger staffs and budgets—

“If the recommendations are approved by the board, schools would be empowered to support student-athletes in a variety of ways without asking for waivers, including providing any support needed for a student-athlete's personal health, safety and well-being; paying for items to support a student's academic pursuits; purchasing insurance of various types; and funding participation in elite-level training, tryouts and competition.”

This Ain't Chopped Liver said:
There is more—

The Division I Council on Wednesday endorsed several recommendations intended to better support student-athletes, improve efficiency and timeliness in the infractions

simply window dressing by bureaucrats who are completely out of touch

asleep003 said:
Parallel to, if everyone packs a gun on their person, it would be safer in this country... lol !
Click to expand...

Certainly it would be a more polite society

Man, with all these transfer portals opening up they'll have to print new rosters at halftime...
T

This is going to kill teams without huge NIL opportunities. There will be zero loyalty. Coaches are already showing players that this is strictly business, and now elite players will do the same to coaches/schools who can’t pay. Be careful what you wish for. College sports are going to suffer as a whole.
E

This is straight up a plan to benefit the big name schools only, and further separate them before ever taking the field.

Limited windows to enter will allow them to see who is available to better plan who to pay without surprises. Yet a student that gets demoted down a spot cannot then move once the new player is brought in.

If transferring w/o sitting out is now the norm at least do it after the football season (which does include bowl season)
Click to expand...

Eight said:
would think the december period would line up with the end of the semester and do see the value to the player and the program to going through spring practice
Click to expand...

It’s all about building a brand.

The more constraints and provisions and hoops-to-jump-through the worse the tranfer process will be for everyone, schools and students and media networks. Heckfire, just allow athletes to jump from one brand to another whenever they want to...mid-term, mid-season, halftime... Make it easy on everyone. Call it the Scotty Wolf Rule.

You can read this in Reader View if you are not a subscriber.

A recommendation to change transfer rules for Division I college athletes that included unlimited opportunities to switch schools with immediate eligibility was bounced back to a committee for more research by the NCAA’s D-I Board of Directors on Wednesday.
….
The board did adopt Transformation Committee recommendations that would allow schools to provide more financial benefits to athletes.

“Schools can now pay for more to support a student’s academic pursuits, purchase insurance such as critical injury or illness and loss-of-value, and fund participation in elite-level training, tryouts and competition,” Transformation Committee co-chairs Greg Sankey, commissioner of the Southeastern Conference, and Julie Cromer, athletic director of Ohio University, said in a statement.
….
The Student Athlete Advisory Committee raised concerns about the transfer windows.
“SAAC fully supports several aspects of the transfer concept, but we believe that transfer windows unnecessarily restrict student-athletes’ freedom of movement,” Missouri volleyball player Brynn Carlson said.
….
The proposal that raised a red flag among coaches and administrators was changing the rule to allow athletes to transfer as often as they wanted and play immediately, as along as they are academically eligible and progressing toward a degree.
….
“Based on that dialogue, we will work to refine our proposal to address how transfer policies align with ongoing academic eligibility and degree progress requirements and deal with current and emerging issues facing college athletics,” Cromer and Sankey said. “Additionally, we will have the chance to learn more about the latest input from student-athletes around transfer windows.”
Last edited: Aug 5, 2022

Roll my eyes at the board (finally) allowing critical injury and loss of value insurance to be bought for players. Should have been where the money was going all along to defend the concept of amateur athletics. And by the way, the non-stars are taking on health risks, too. When the players unionize, schools will have no one to blame but themselves.