247 Sports: Back in business: TCU basketball blows out No. 25 Iowa

Back in business: TCU basketball blows out No. 25 Iowa 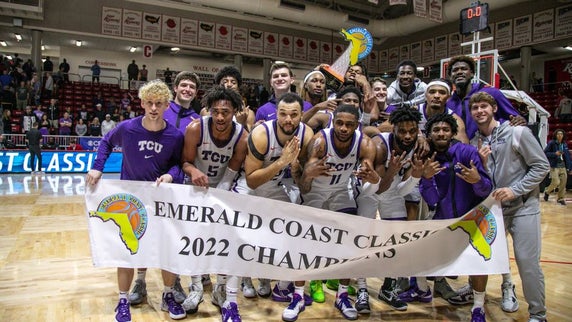 For the first time since March, TCU basketball looked as good as advertised on Saturday night against No. 25 Iowa, putting some of their early-season woes to bed and earning their first ranked win of the season in resounding fashion.

Leading by as much as 23 points late in the second half, the Frogs handed the Hawkeyes their first loss of the season, as TCU won 79-66 to gain some much-needed momentum and win the Emerald Coast Classic.

Big 12 Preseason Player of the Year Mike Miles was named MVP of the tournament after following a 23-point performance in the semifinals with a 15-point, 5-assist effort in the championship win.