We can all agree on:
1. Just WIN Saturday
2. Baylor still vacuums

LisaLT said:
KSU is in the unique position to know what bowl game they get before the game is even played.
Click to expand...

I don’t think it’s a certainty that the Sugar picks a 9-4 KSU over 8-4 Texas (who beat KSU in Manahattan). They’d be much higher-ranked though, so probably would.

Frog-in-law1995 said:
I don’t think it’s a certainty that the Sugar picks a 9-4 KSU over 8-4 Texas (who beat KSU in Manahattan). They’d be much higher-ranked though, so probably would.
Click to expand...

Bob Sugar said:
Again, possibly not "much higher ranked". If the committee has UT around 16-17 and KSU at 10, it's conceivable that UT ends up higher ranked. If UT is down at like #20-21, then I agree.
Click to expand...

I’m expecting KSU to remain about 10 spots higher than Texas tonight, but if it’s a lot closer, yeah. Doubt the CCG losers drop much next week. 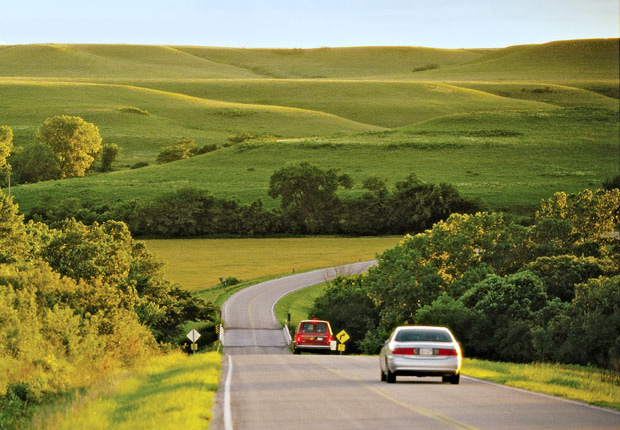 Manhattan is in the Flint Hills a unique tallgrass prairie ecosystem found in central North America. It is a tallgrass prairie, a type of temperate grassland, marked by few trees but abundant forbs and grasses that can grow up to 10 feet tall.

You Texans send your cattle up here every spring to graze on the spring grasses. It's like Ireland.

BrewingFrog said:
Yes, but the root of the word is ruminant, referring to mammals with a particular style of processing grasses, which happen to be the type of animals large predators prefer to dine upon. (Full disclosure: I have 20-odd ruminants out in my pasture being quite contrary...) Hence, the light jest based upon his wording.

Honestly, Deep, I would have thought you of all people would have recognized a wordplay joke and been at least slightly amused, as opposed to leaping into action to correct a perceived error...
Click to expand...

But I guess two can play. Ruminant as applied to browsing and grazing animals was a secondary meaning of the Latin root ruminare, which means "to chew the cud." But the word wasn't applied literally to what we now call with cud-chewing or ruminant animals until around 1660. It's primary application from the 1530s was as an idiomatic expression meaning to "reflect deeply" or "turn over in one's mind," possibly in discussion with others.

We see this even in Shakespeare:

"Ruminates like an hostess that hath no arithmetic but her brain to set down her reckoning."
--Troilus and Cressida: Act 3 , Scene 3, Lines 265-66

A modern parallel might be "Hit me," which is primarily used idiomatically to mean "Deal me a card" -- not literally as in "Strike my person."

An aside: My grandfather was a lifelong cattleman. Knew more about cattle than perhaps any two men I've ever known. I don't think he'd ever even heard the word ruminant.
K

bmoney214 said:
If we win Saturday, it won't be the biggest game in TCU history. The next one will be.
Click to expand...

No, it's the one after that. National championship. Pretty big.

Brog said:
No, it's the one after that. National championship. Pretty big.
Click to expand...

One game at a time buddy.

bmoney214 said:
One game at a time buddy.
Click to expand...

Because we're not playing for a national championship yet. Have to take care of business Saturday first before we can even think about that. The original question was, is Saturday the biggest game in TCU history. You jumped forward 3 games lol.

bmoney214 said:
Because we're not playing for a national championship yet. Have to take care of business Saturday first before we can even think about that. The original question was, is Saturday the biggest game in TCU history. You jumped forward 3 games lol.
Click to expand...

Maybe I'm an optimist. You don't think we can win Saturday?

Brog said:
Maybe I'm an optimist. You don't think we can win Saturday?
Click to expand...

I refuse to answer that because I don't want to anger the football gods and Jobu.

I'm an optimist too but I'm also superstitious and believe that it is possible to kaylee hartung things.
P

I may be in the minority here, but I feel you only have a home-field advantage if you're actually playing on your home-field. People always bring up how close in proximity one team's school is to the stadium, but that stadium and its surroundings is still not all that familiar to the team. It's not like we have spring practices/scrimmages or fall practice/scrimmages or play a couple games during the season in the stadium for it to be a true home-field advantage.

PineyWoodsFrog said:
I may be in the minority here, but I feel you only have a home-field advantage if you're actually playing on your home-field. People always bring up how close in proximity one team's school is to the stadium, but that stadium and its surroundings is still not all that familiar to the team. It's not like we have spring practices/scrimmages or fall practice/scrimmages or play a couple games during the season in the stadium for it to be a true home-field advantage.
Click to expand...

This is the right answer. There will be some minimal advantage to not having to get on a plane but it's not like KSU is flying 5 hours across the country. And of course crowd noise is something that can be an issue if you have enough people but as large as these NFL stadiums are (and especially this one) then you would probably need 70% + of the stadium filled with your fans in order to get a really significant crowd noise edge.

tjcoffice said:
And here are the 1938 Horned Frogs whipping up on Baylor. Watch Davey O'Brien and Ki Aldrich run circles around the Baylor defense. https://texasarchive.org/2015_02395
Click to expand...

LisaLT said:
KSU is in the unique position to know what bowl game they get before the game is even played.
Click to expand...

I wonder what that does to their determination if the Frogs land some early punches.

We will definitely have a home field advantage because.....

Deep Purple said:
Too much hyperbole. Just off the top of my head, I can think of at least four games that were as big or bigger than this upcoming one.

1. In 1935 both TCU and SMU were sitting at 10-0, both vying to cement a #1 ranking as they faced off in the last game of the regular season, billed as "The Game of the Century." There was no playoff or championship game then. Mythical national champion titles were conferred willy-nilly by a hoard of mathematical ranking systems, sportswriters, and athletic foundations. SMU beat TCU by a field goal and went on to the Rose Bowl to face Stanford, while TCU went to the Sugar Bowl against Tulane.

Following the SMU win over TCU in the final regular-season game, the bulk of the rankings morass proclaimed SMU #1. A few named Minnesota or Princeton #1, but they were voices in the wilderness. However, there was a fly in the ointment. These rankings covered only the regular season without taking in account any bowl results. After these rankings were issued, SMU lost the Rose Bowl while TCU won the Sugar Bowl. Following the bowls, the only post-bowl ranking -- Williamson -- proclaimed TCU national champions and named LSU as #2. The Sugar Bowl win cemented that championship.

2. In 1938, the Frogs were 9-0, vying for another national championship, and again facing SMU in the final game of the regular season. It was at Ownby Field in Dallas, and though the Ponies were not in the national champion picture that year, they were amped to spoil TCU's perfect record. The Frogs won handily, going on to defeat Carnegie Tech in the Sugar Bowl. This time there was no post-season rankings fire drill because in 1936, the NCAA had adopted the AP poll as the sole official ranking. The Frogs were their consensus choice in 1938. TCU had once again won a national championship at the Sugar Bowl.

3. TCU's 7-5 regular season in 1998 followed a 1-10 season in which the Frogs had barely avoided going winless by defeating hapless SMU in the very last game. It was a notable comeback, but was discounted by many as the product of a soft WAC schedule. Nobody (including TCU fans) thought it was an indicator that TCU was on the verge of something big. Due to WAC political rivalries over the impending 1999 departure of eight schools for the newly formed MWC, the Frogs received a totally unexpected berth in the Sun Bowl, where virtually no one gave them a prayer of defeating 8-5 USC from the PAC 10.

The Frog victory defied all expectations, serving notice that TCU was bent on returning more or less permanently to relevance in the national panorama of college football. Considering the string of successful TCU seasons that followed, the 1998 Sun Bowl was dubbed by many as the birth of the Great TCU Football Turnaround.

4. In the wake of the Turnaround, TCU reeled off a string seven double-digit winning seasons interspersed with some rebuilding years, several of which were still winning seasons. But while the Frogs became a consistent resident in the Top 25 and Top 10, their post-season bowl record was still a mediocre 6-5. They had clawed their way back from college football's wasteland, but had yet to make a place among its upper echelon. That opportunity came in 2010, when the MWC-champion Frogs finished the regular season at 12-0, were positioned at #3 in every national ranking (including the BCS), and had an appointment with destiny at the Rose Bowl against 11-1, Big 10 co-champion, #5 Wisconsin.

Once again, despite having a better W-L record and higher national ranking, the Frogs were cast as a "weak" Mountain West underdog facing an elite Big 10 powerhouse. The ramifications of the TCU win can't easily be overstated. Texas A&M and Missouri had announced they were bailing on the Big 12 for the SEC, and TCU was among 5-6 teams being casually considered as potential replacements. The Rose Bowl victory elevated TCU to the top choice, making the Frogs a virtual lock for Big 12 membership. It ended TCU's 16-year absence from the national power conferences.

Equally importantly, the Frogs' Rose Bowl win was considered by a host of national sports pundits as TCU's "arrival" among the upper echelon of college football. In subsequent seasons, TCU would again factor into the national picture in 2011, 2014, 2015, and 2017. The four-year "drought" that characterized Gay Patterson's final years tarnished that image, but didn't entirely dispel it.