Frogs in that awkward spot of trying to protect a 15-shot advantage over playing partner Kansas because closing a 16-shot gap to overtake Tech is unlikely. So, naturally, they give up 9 shots on the outbound nine, give up 3 more to make it really interesting, then manage to hold off the Jayhawks down the stretch to finish 5th.

Frogs return to the mean today and shoot +12, but still manage to stay ahead of Kansas, who shot +1.

Fifth place in this conference this year is not bad at all...the gap between fifth and the top 4 is troublesome, though.
F

Should be the end of the season for the men’s team and certainly a head scratcher. A lot of returning talent from a good team last year and they underperformed all year.

Sandy Scott from Tech was once the 5th ranked amateur in the world. He hurt is wrist last year, and has dropped to 2,311th. Former second team All-America finished t37th out of 46. Tough break for this kid.

TCU women get the 6 seed in Albuquerque. 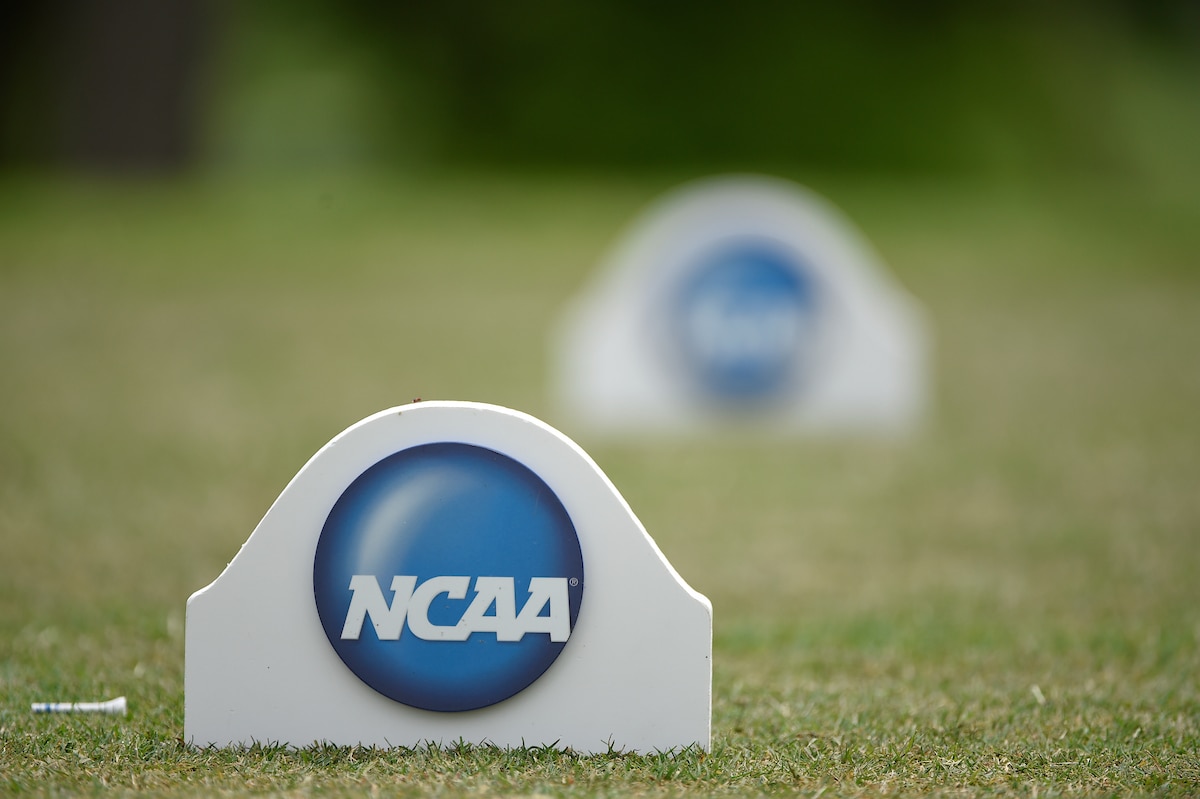 The regional round will be played May 9-11. The top four teams and two individuals from each regional will advance to the championship May 20-25 at Grayhawk Golf Club.

Top 4 teams and 2 individuals advance to nationals. Teams seeded ahead of the Frogs include Oregon, Florida, Texas, Arizona and Georgia. Not too many vulnerabilities there, although Arizona is an up-and-down team. Will be a good test.

gohornedfrogs said:
UT plays 17 & 18 +5, and OU plays those two even par to win by two over Okie State. UT drops to third.
Click to expand...

The whole day played out strangely. OU looked to have put it away early, getting to -20 or thereabouts at the turn. OSU was out a few holes ahead and made a run to -17, but they dropped a couple to end the run, and then a guy made what seemed like a meaningless triple at the last to drop them to -12.

OU's big lead was back and Texas was stuck in neutral--until they made up 5 shots in a 3-hole stretch, followed by a 6-shot swing at the 14th to take the lead out of nowhere. Guys on both teams tensed up and started leaking shots, and they very nearly played themselves back to OSU. That "meaningless triple" turned out to be the difference.
F

froggolf65 said:
Should be the end of the season for the men’s team and certainly a head scratcher. A lot of returning talent from a good team last year and they underperformed all year.
Click to expand...

Hayden Springer with a 66 today to get into the top 10 at the Peru Open.

Edit: He finishes T7; puts him into the top 20 on the points list. The good stuff (promotion to Korn-Ferry only happens for the top 5, but he is looking good to keep his status for next year in Latin America.
Last edited: May 1, 2022

Annika Clark with a valuable lesson in pro competition on the Women's All Pro Tour last month in Wichita Falls. She had a share of the lead through 48 holes at -1, but she dropped 10 shots the rest of the way to finish solo 16th. She has made three cuts in four events, but no top-10s yet. Greta Bruner has also made a few starts on the WAPT but has yet to earn a check.

Aymeric Laussot and Justin Gums are among the individuals selected to compete in NCAA Regionals. Both will tee it up in Bryan on May 16 for an opportunity to advance to Greyhawk.

Add Mens Golf to the list of needing a coaching change

Paul Barjon with a bogey-free 65 opening round at Quail Hollow Avenel. He's T3, two shots off of Jason Day's lead.

Edit: Wells Fargo has apparently moved on from Quail Hollow, which hosts the Presidents Cup later this year. Barjon fell back and finished 51st; he needs a good finish or three to move up from the 170s on the points list.
Last edited: May 9, 2022

I posted about the female Frogs playing on the Women's All-pro Tour a few days ago but failed to mention the men. Two Frogs finished in the top 5 at the APT event at Firewheel a couple of weeks ago. Andrew Presley had a closing 64 that earned a T4 finish in the field of 150. He was outdone by Hayden Springer, who led into the final day but fell a shot short of a playoff.

Hayden has followed that up with two good finishes in South America; this week he's in Quito and T11 after round 1.

Julian Brun finishes T8 at the Euro Tour's stop at The Belfry. Eagled the 17th hole two days in a row; today's eagle put him into the top 3, but he rinsed one at the last while pushing for the clubhouse lead. Still, a good result that gets him into the top 50 on the order of merit.

TCU women start play in the NCAA Albuquerque Regional this morning at the University of New Mexico Championship Course, which sits at 5,300 elevation. I don't think the women have played at altitude this year; hopefully they've had a chance to work out yardages during prep. It's 54 holes over three days.

The field of 12 teams is paired by seeding, which is good for the Frogs as the 6th seed in a tournament where four teams advance: Win the pairing with seeds 4 & 5 (Arizona & Georgia), and there's a decent chance to advance. (Although I was a little surprised that the Golf Channel guy pegged 8th-seeded North Texas as the darkhorse team in the region.) The top 3 seeds are Oregon, Florida and Texas (ranked 2nd, 11th and 13th).

Sixth-seeded TCU is rolling with the same lineup they've used in the past two tournaments: Macnab, Iqbal, Lau, King and Pacheco. One sub is allowed, I think; not sure if TCU brought a sixth player.

Beyond 4 teams, the 2 best individual scores also advance to nationals at Grayhawk in two weeks. To that end, I wasn't glad to see two UNM players competing as individuals on their home course, but at least UNM did not qualify as a team.

Also, shout out to Sabrina Iqbal on earning her degree in entrepreneurship & innovation last week.

TCU women are T4 after the opening round in Albuquerque and Sabina Iqbal is T2 individually after a bogey-free 68.

Frogs definitely still in it, but a ton of golf to go.

Haven't been following U.S. Open local qualifying, but took some time today to see how some old and new Frogs have done. A couple of very close calls.

J.J. Killeen made a 3-for-2 playoff in the Midland qualifier after finishing T2 in a field of 55...but was the odd guy out in the playoff, which included OU's Ben Lorenz, and will be first alternate for sectionals. TCU's other J.J. also competed in Midland.

Franklin Corpening made a 4-for-3 playoff in Kerrville after finishing T3 in a field of 84...and also wound up as first alternate. Maybe @First Tee Frog has more on that story? Also curious if he got to see incoming Frog Andrew Spaulding, who finished well back, and to add insult to injury, finished behind Matt Spaulding (younger brother, I think).

Stefano Mazzoli finished a shot out of a playoff in Grand Prairie after finishing T11 in a field of 132--his 68 was not quite enough. The other incoming Frog, Jack Beauchamp, shot 72.

I mostly looked at the qualifiers in Texas and New Mexico, so perhaps have missed some. If anyone is aware of other Frogs advancing or coming close, please post.

TCU women have put up a lot of birdies today--12 to Georgia's 6. But the Frogs have also made more bogeys. At the tournament's halfway point, TCU is a shot back of 4th place. Frogs are putting up a fight, and all 5 players have a chance to post a counting score.

For the TCU women, the Albuquerque Regional has played out as hoped. Sabrina Iqbal and Caitlyn Macnab are both in the top 10; no one in the 3-4-5 slots have shot themselves out of a round early, and if things finish tomorrow as they stand right now, the Frogs would advance to Grayhawk.

Playing partner Georgia matched Oregon for the round of the day, so when TCU finished early at +7, it looked like they were 6 shots out of a qualifying spot. But 11th-ranked Florida stumbled home behind them at +8, so the Frogs' score is the current cutoff. Besides Florida, teams that TCU will need to hold off tomorrow include Arizona (+12), Sam Houston (+12) and Louisville (+15).

Macnab and Lois Lau both shot 71 to lead the Frogs today; Caitlyn's card was a model of consistency with 15 pars, while Lois had an adventure with 6 birdies against 5 bogeys. Iqbal added a 73 and is T4 individually at -3, although the leader looks hard to track down at -10. Macnab is T6.

In the Franklin Regional, former Frog Jennie Park leads by 3 shots. Playing out of the 5 slot, Park is single-handedly keeping A&M's season alive, shooting -9 while the rest of her team is +17. Aggies are 5 shots out of a qualifying spot. Would have been nice to have her 69-66 on the Frogs' card, but the change of scenery seems to have been good for her.
Share:
Facebook Twitter Reddit Pinterest WhatsApp Email Share Link