The 2nd full season under Patterson went much better than 2001. This will be multiple posts Brief notes of the season:

Funny thing is TCU lost the season opener Labor Day at Cincy. A great game, we gave it away in the 4th quarter than OT. Here's the Cincy local recap of the game, I remember watching the game on ESPN.


A big road win against Northwestern which, was nice to win against a Big-10 school even if it was NW. Sean Stilley played well and TYE GUNN scores as well!
Last edited: Jan 23, 2022

It was Tye Gunn freshman year and one of the biggest "what if he could stay healthy" guys during GP-era. 4 seasons at TCU and only saw the field 22 games.

The winning streak would continue with SMU and North Texas in some yawners. (actually closer than we wanted)

The U of H game would be Tye Gunn first start, he got the W. It was also a Lonta Hobbs experience! Here's GP quote:

"We wanted to get Lonta into the game. He scares the heck out of me because he wants to play and he's not scared."

Lonta Hobbs would shine his freshman season. Him and Ricky Madison made our running game unstoppable. Hobbs rushed over 1000 yards, 12 rushing TDs and averaged over 6.5 ypc. (Only played 8 games!!!)

Big road wins against Army and Louisville and eyebrows started to raise. 6 wins and 1 loss going into a Wednesday night game against So Miss at home. We absolutely smoked them 37-7 at home. I remember the student section was pretty loud that night. 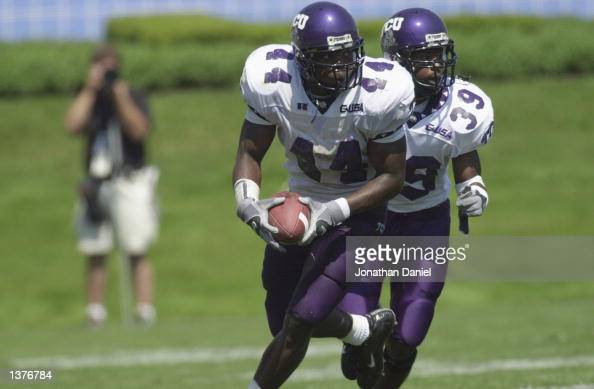 The defense was stout. LaMarcus shined his junior year. First team all-conference defense along with Jason Goss (8 INTS!!!) and Bo Schobel. Nick Browne was also having an insane season at kicker.

The win streak gets to 8 wins but, the road game at East Carolina does this team in. 2nd loss in a road against the Pirates. Lonta had a helluva game and we had the lead into the 4th but couldnt hold it.

We would win our last home game of the year going undefeated against Memphis.

Then the Liberty Bowl! Against another teaam with a tough QB and rough defense. Like looking in a mirror.

We kept the Rams outta the end zone and it was by the end of this season that we knew we had something at Head Coach. Our teams would be a tough out against anyone.
Last edited: Jan 3, 2022

Just realized we had 7 TURNOVERS in the East Carolina game??? brutal

The Sean Stilley experience was over. It would now be Tye Gunn and Brandon Hassell at QB moving forward.

Hobbs was really fun to watch. Went to elementary school with one of his cousins. Also coach Montigel’s son and I were playing football one day in the field and got to talk with him. Super nice dude to us. Nobody sold the fake option pass like Gunn. 2002 was a really fun year.

I loved that team and year. Liberty Bowl still ranks up there as one of my personal favorites. The weather sucked, but all the CSU fans talking trash the night before seemed to have stayed home as we partied NYE away on Beale St.!
F

Best part of the Louisville game in 2002 was that it was homecoming there....Community was whipped to a frenzy, seeking revenge against TCU for the only loss in 2001....Frogs came out firing, jumping to a 17-0 lead and Channel 5's Newy Scruggs (Ch. 5 broadcast non-network; I'm not sure how that worked) said "the rout is on." The Louisville fans began to boo their team--on homecoming--and continued the rest of the first half, which was a 31-6 lead for the Frogs....45-31 final, TCU....

Froginbedford said:
Best part of the Louisville game in 2002 was that it was homecoming there....Community was whipped to a frenzy, seeking revenge against TCU for the only loss in 2001....Frogs came out firing, jumping to a 17-0 lead and Channel 5's Newy Scruggs (Ch. 5 broadcast non-network; I'm not sure how that worked) said "the rout is on." The Louisville fans began to boo their team--on homecoming--and continued the rest of the first half, which was a 31-6 lead for the Frogs....45-31 final, TCU....
Click to expand...

This is still one of my favorite years as a Frog Fan. Went to all the home games plus Memphis.

#7 looks to be finally having first baby. Last I saw him, as he has been big part of our tailgate for years, I encouraged some logical thought for a little boy name. Gunner, Jett, Sling were all offered up and all I got back was a NFW look, so I opined perhaps there might be 2 boys in there, brothers on the edge, Blitz and Rush!!!!!

Section 204 row D 11,12 B Hass usually close by on the lightly attended games!

2002 was also one of my favorite seasons. I believe that team was better than the 2003 team that almost crashed the BCS.. We lost two squeekers at Cinci (1st game) and at East Carolina. A different play on either of those games and we'd likely have busted into the BCS.. I'll never forget sitting with the few other Frogs when TCU was driving and about to put the game out of reach for us when an ECU defender literally took the ball out of Ricky Madison's arms right in front of all of us and ran all the way back for a TD. Lonta Hobbs was incredible that year before injuries rendered him to be very good but not phenominal like he had been.
Share:
Facebook Twitter Reddit Pinterest WhatsApp Email Share Link